Missile wave and sirens start the new year in Ukraine 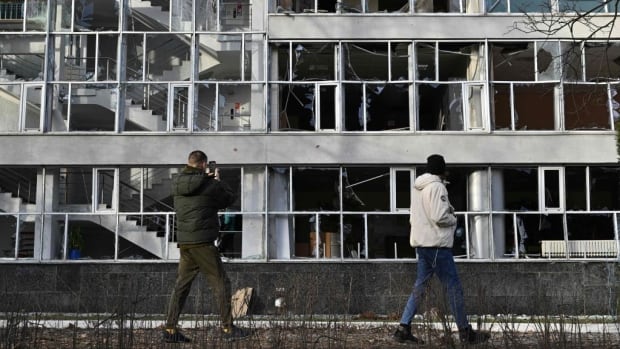 Ukrainians woke up to a bleak 2023 on Sunday as they were hit with more sirens and new missile attacks as the death toll from Russia’s massive New Year’s Eve attack across the country rose to at least three.

Many woke up on New Year’s Day, when Kyiv was largely quiet, and enjoyed a bit of peace.

Of course, it was difficult to celebrate in full, because we understand that our soldiers cannot be with their families, ”said Evgenia Shulzhenko, sitting with her husband on a bench in a park overlooking the city.

But Shulzhenko said the “really strong” year-end speech of Ukrainian President Volodymyr Zelensky on New Year’s Eve lifted her spirits and made her proud to be Ukrainian. She recently moved to Kyiv after living in Bakhmut and Kharkiv, two cities that saw some of the war’s fiercest fighting.

A curfew that lasted from 7pm to midnight remained in place across the country, making early 2023 celebrations impossible in public.

Ukraine’s high command said in a report on Sunday that Russia had launched 31 missiles in 12 airstrikes across the country in the past 24 hours.

Russian President Vladimir Putin, in his New Year’s speech, indicated that the war, which has entered its eleventh month, will continue.

“Russia coldly and cowardly attacked Ukraine in the early hours of the New Year. But Putin doesn’t seem to understand that Ukrainians are made of iron,” US Ambassador to Ukraine Bridget Brink said on Twitter.

Andrii Nebytov, Kyiv’s chief of police, posted a photo on his Telegram messaging app, purportedly of a piece of a drone used in the attack on the capital, with a handwritten banner in Russian saying “Happy New Year”.

“These wreckage are not at the front where fierce fighting is going on, they are here, at the sports grounds, where the children play,” said Neptov.

The Ukrainian Air Force Command said it had destroyed 45 Iranian drones, including 32 after midnight on Sunday and 13 late on Saturday.

Victims in Kyiv and Kherson

Several explosions rocked the capital and other parts of Ukraine on Saturday and throughout the night, injuring dozens. An Associated Press photographer at the scene of an explosion in Kyiv on Saturday saw the body of a woman as her husband and son stood nearby. Mayor Vitali Klitschko said two schools were damaged, including a kindergarten.

The strikes come 36 hours after large-scale missile attacks launched by Russia on Thursday to destroy energy infrastructure. The unusually quick follow-up on Saturday alarmed Ukrainian officials. Russia has attacked Ukraine’s energy and water supplies nearly every week since October, adding to the suffering of Ukrainians as its ground forces struggle to hold territory and advance.

The deputy head of the presidential cabinet, Kirillo Tymoshenko, said that the nightly bombing in parts of the southern city of Kherson killed one person and destroyed hundreds of windows in a children’s hospital. Ukrainian forces retook the city in November after Russian forces withdrew across the Dnipro River, which divides the Kherson region.

When shells hit the children’s hospital on Saturday night, Kherson governor Yaroslav Yanushevich said surgeons were operating on a 13-year-old boy who had been seriously injured in a nearby village that evening. The bombing destroyed the windows of the operating room, and the child, who was in serious condition, was taken to a hospital about 99 kilometers away in Mykolaiv.

Elsewhere, a 22-year-old woman succumbed to her injuries in a missile attack on the town of Khmelnytskyi, to the east of the town, the town’s mayor said.

Instead of fireworks, Oleksandr Dugin said he and his friends and family in Kyiv watched the sparks caused by the Ukrainian Air Defense Forces’ response to the Russian attacks.

“We already know the sound of missiles, we know when they fly, and we know the sound of drones. The sound is like the roar of a small motorcycle,” said Dugen, who was riding with his family in the park. “We’re holding on to it as best we can. »

While the Russian bombing left many Ukrainians without heat or electricity due to damage or blackouts aimed at saving the remaining electricity, Ukraine’s public grid operator said on Sunday that there would be no one-day limit on electricity consumption.

“The energy industry is doing everything it can to make New Year’s holidays light without restrictions,” said utility company Okernergo.

She said businesses and industry have cut spending to allow more energy into homes.

On the other hand, Vyacheslav Gladkov, governor of the Belgorod region in southern Russia bordering Ukraine, said that the nightly bombing on the outskirts of the town of Chebykino damaged houses, but did not result in casualties.

Six people were killed when a hospital in Donetsk was attacked on Saturday, the Russian news agency reported, citing a local doctor.

There was no response from Kyiv, which has not claimed any attacks inside Russia or on Russian-controlled territory in Ukraine.

There was no independent verification available of the Russian media reports.