Canada buys a US missile defense system for Ukraine 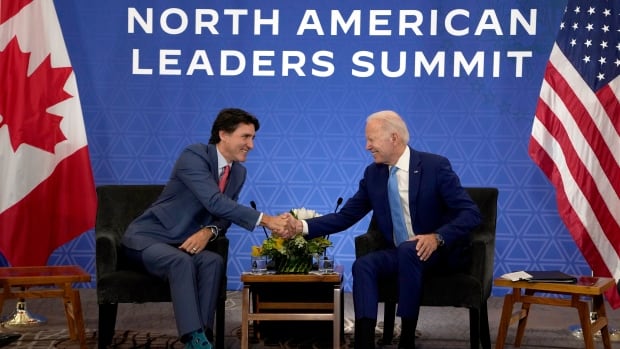 The Prime Minister’s Office (PMO) announced that Canada will buy a US-made missile defense system for Ukraine and host US President Joe Biden for a visit in March.

The news came during a summit of North American leaders in Mexico City on Tuesday, following a meeting between Prime Minister Justin Trudeau and Biden.

A PMO readout of the meeting said Trudeau told Biden that Canada would buy a National Advanced Surface-to-Air Missile System (NASAMS) for Ukraine.

The missile defense system was jointly designed and developed by the American defense company Raytheon and the Norwegian company Kongsberg Defense & Aerospace.

“I spoke with Defense Minister of Ukraine @OleksiiReznikov this morning and heard it myself: Air defense systems are Ukraine’s top priority,” Anand said in a tweet.

This is why Canada is purchasing the National Advanced Surface-to-Air Missile System (NASAMS) from the United States as a donation to Ukraine. »

I spoke with the Minister of Defense of Ukraine Oleksey Reznikov This morning you heard it yourself: air defense systems are Ukraine’s top priority. This is why Canada is purchasing the National Advanced Surface-to-Air Missile System (NASAMS) from the United States as a donation to Ukraine. pic.twitter.com/33bdHmcldb

This is the first air defense system that Canada has purchased for Ukraine, Anand said in a follow-up tweet.

“In the face of brutal Russian airstrikes on Ukraine, this air defense system will help protect Ukraine’s population centers and critical infrastructure from attacks by drones, missiles and aircraft,” he said.

Read did not provide additional details about the purchase, such as cost or expected delivery date.

In November last year, the US government awarded Raytheon a $1.2 billion contract to supply six NASAMS units to Ukraine.

Canada has provided more than $3.4 billion in military and humanitarian aid to Ukraine since Russian President Vladimir Putin ordered the invasion of the country in February 2022.

Biden is making his first visit to Canada

The statement said Trudeau had invited Biden to Canada and that the president would visit Canada in March. He did not mention a place or date.

This will be Biden’s first official trip to Canada since becoming president in January 2021.

White House minutes of the meeting confirmed the March visit.

“During the meeting, the president also expressed his aspiration to visit Canada in March this year,” the statement said.

The Prime Minister’s Office read that Trudeau and Biden discussed trade issues between the two countries, including the Biden administration’s “Buy America” ​​policy and the softwood dispute.

The House passes the controversial rules package, with only one Republican opposed